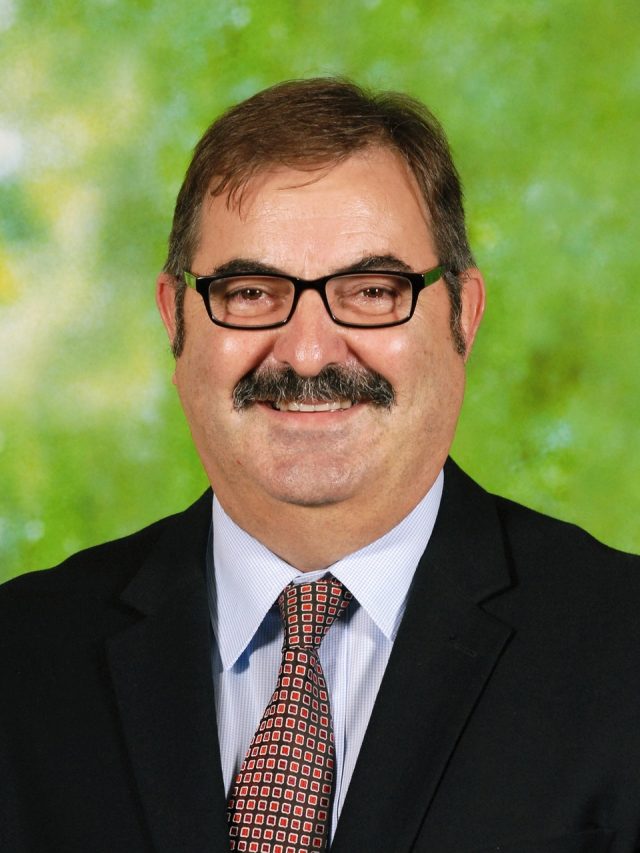 Below is a copy of the citation that was gifted at the presentation of an Honorary Life Membership to Mr Dennis Garoni, Founding Head of Junior School, Girton Grammar School.

The presentation was made on Friday 4th December, 2020, at an all-staff assembly.

It is a true delight and honour to bestow an Honorary Life Membership of the Old Girtonians’ Association on Mr Dennis Garoni.

It is the OGA’s honour to acknowledge and recognise the outstanding contribution of Mr Garoni, who joins only 11 other people previously bestowed this level of membership to the OGA.

It is a monumental decision to embrace a leadership position in a failing organisation, and only those with the sturdiest mettle, the strongest work ethic and a deep love of the job would contemplate such a fate. In 1992, Mr Dennis Garoni became the founding Head of the Girton Grammar Junior School and stared down the obstacles in front of him, rolled up his sleeves and took to the task of making Girton one of the finest schools in Victoria.

Twenty-eight years later, having loyally contributed his knowledge, his expertise, his heart, and his soul to every possible facet of the School, Dennis is aptly considered one of the pillars of Girton. No sooner had Dennis resigned from Brighton Grammar to move to Bendigo, had a paintbrush been put in his hands by the founding Headmaster, Mr Clayton Jones, and the job of getting run-down classrooms presentable for students to commence the new school year was underway.

They were frantic, heady days in the summer of 1992-1993 when Dennis threw himself into the task of recruiting staff, building curriculum and being all things to all people at all hours of the day in order get the new school fit for purpose. The importance of the founding work that Dennis undertook in the first few years of the school’s operation, with the two Deputy Heads, Mr Tony Sheumack and Mrs Robyn MacCulloch, along with Mr Jones, cannot be overstated. The work required to establish Girton Grammar School demanded contributions by the school leaders in strategic planning and tactical work for which enough appreciation from generations of students, staff and parents can barely be bestowed.

Dennis’ work is esteemed across all areas of the school. From the brightest of students to those who struggle on a daily basis, Dennis has taught them all, applying to each of them the insights that only a gifted educator can confer. From stretching the talented students even further, to writing personalised prose that fires the imaginations of those who find literacy challenging, Dennis always wants his students to understand that they can strive for success and take joy in discovering that they can achieve great things. As a master of the written word, many students have delighted in Dennis’ clear imagery conjured from words singing on the pages. Many a Girton editorial, staff testimonial and speech, have been written by Dennis over the years, shaping the culture of the school with his linguistic flair and masterful articulation of school values, which he both evokes in words and embodies in life.

Over the years, Dennis has been instrumental in staff recruitment, development, and support, formally in his role as Head of Staff and informally as a mentor and natural leader to staff in all levels of the school. His competence in building strong and collegiate teams and his insight and judgement have been of enormous benefit in various leadership roles. Dennis is known for his gift of connecting with people instantly, through an understanding of the special qualities which make each person unique. He does not judge people harshly or use the artificial constructs of the materially obsessed, vanity driven values, which can lead to quick and shallow judgements.

Those who have worked with Dennis know of his sharp intellect and willingness to be the Devil’s Advocate. With a penchant for efficient and practical research, and a readiness to do the work himself, Dennis has helped to nurture a work culture in the school of fact-checking, taking a broad view and continually questioning the rationale for decision-making. Bringing to the table a strong sense of integrity, transparent honesty, and sharp intellect, Dennis has been invited to discussions of every kind within the school because colleagues know that his contributions will enable all to see with clarity the actual issues and to make more finely considered and robust conclusions as a result.

Parents, students and staff have many stories to tell of Dennis and at the heart of every narrative is an authentic human connection with a man who cares deeply for others. One parent fondly recalls Dennis joining a traditional half-time football huddle as a father-figure to support her young boy; another tells of a powerful speech at her child’s end of Year 6 celebration evening that she remembers seventeen years later; a colleague talks of Dennis instinctively taking charge when distressed by impending danger facing his/her daughter, making phone calls to family members and offering without hesitation to drive her/him to Melbourne; and on Old Girtonian still recalls expecting punishment after an indiscretion when aged four, but instead being gently and discreetly coached about what it is to tell a lie, a lesson he remembers for its kindness and understanding that has had more impact than a reprimand ever could.

Dennis’ love and care for other people is generous and boundless. His compassion and humour have helped many troubled students through difficult days and his work in Inclusive Education, bringing hope and instilling belief in students who do not believe in themselves, has left many families profoundly thankful and deeply indebted to his kindness and expertise as a first-class educator.

Dennis has a rare knack for calling a spade a spade without causing harm or insult in the process, and in all likelihood, bringing those around the table together in laughter. Colleagues and friends describe his humour as puckish, rogue, dry and rambunctious, and those on the receiving end of his quips, his quick rebuttals, his puns, and his famous limericks, agree that his company is glorious fun. Dennis’ wife, Lynette, and Old Girtonian sons, Chris and Jonathan, are the great loves of his life and he carries them in his heart on each and every day. He fully exemplifies the richness of a husband and father who celebrates the joy of family. The vividness of this example and the depth of character that it shows has been one of the many immeasurable yet invaluable gifts that Dennis has given Girton students and colleagues over many years. The Richmond Football Club and cricket are his second loves, providing stories and memories shared with many colleagues and friends with pride and hilarity in equal measure in staff rooms over the years.

There are generations of Girton boys and girls who knew “they were walking, talking advertisements for the School” each time they wore their school uniform. For twenty-eight years, Dennis has given all of himself to the school that he loves, and in return, he is also much-loved. He leaves Girton a lasting legacy of what it is to be a person of decency, honesty and intellect. 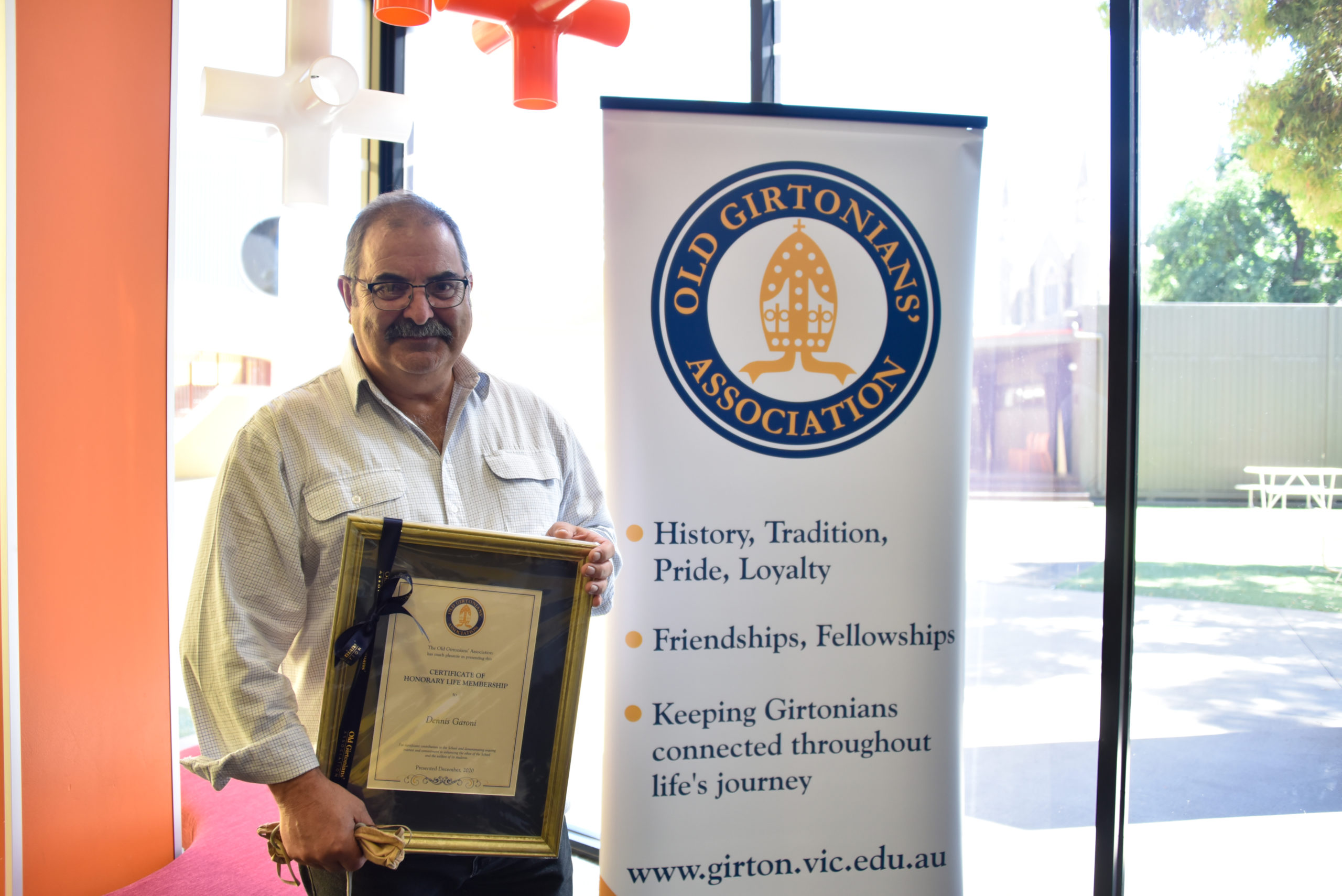