The purpose of forming the OGA in 1914 was to arrange a suitable memorial to perpetuate the memory of Mrs Millward and Mrs Aherne, the co-founders of Girton.

It was agreed that the memorial should take the form of a scholarship to be called the Aherne-Millward Scholarship.

To this day, we honour our founders by still awarding an OGA scholarship each year to a departing Year 12 student.

The first elected President in 1914 was Gwen Lansell (nee Frew).   Gwen was educated at Girton College and later at Tintern Girls’ Grammar School.  She became Lady Gwendoline Lansell when she married Sir George Victor Lansell, son of local legend George Lansell “The Quartz King”.  Incidentally, Gwen’s mother would later be formally anointed the “Patroness” of the school and would become the namesake for Frew House.

As custodians of the school’s history, the OGA understands the importance of keeping historic details in-tact so that the story behind them, so crucial in our schools’ fabric, is passed onto the next generation.

Over the course of the last 100+ years, the contributions of the OGA to Girton College and Girton Grammar School are in themselves a fascinating sign of the times. For example:

As a reflection of the times, the OGA is now focused on things like supporting students in career choices and providing professional and social networking opportunities.

These are really important opportunities which the OGA will continue, but we will also continue to cherish the small things, like the donations often received from past families.

It is the sum of small gestures like these that need to be acknowledged and appreciated if the history of our school is to be as proud in the next hundred years as it has been for the last hundred years.

The Old Girtonians’ Association has been incredibly lucky to have many OGA volunteers who have worked selflessly behind the scenes in so many ways over the generations.  It is the unwavering support and commitment to the vision of an outstanding school that our volunteers have safeguarded our school’s narrative and vision.  It’s impossible to measure the benefit that past, current and future students will gain from their hard work.

We feel truly privileged to be part of such a long history of academic excellence and to have a culture of optimism and commitment in both students and staff that translates to personal and academic achievement.

Our school values have been unwavering for the 100+ year duration of the OGA’s work and will continue to be upheld, hopefully, for the next 100 years. 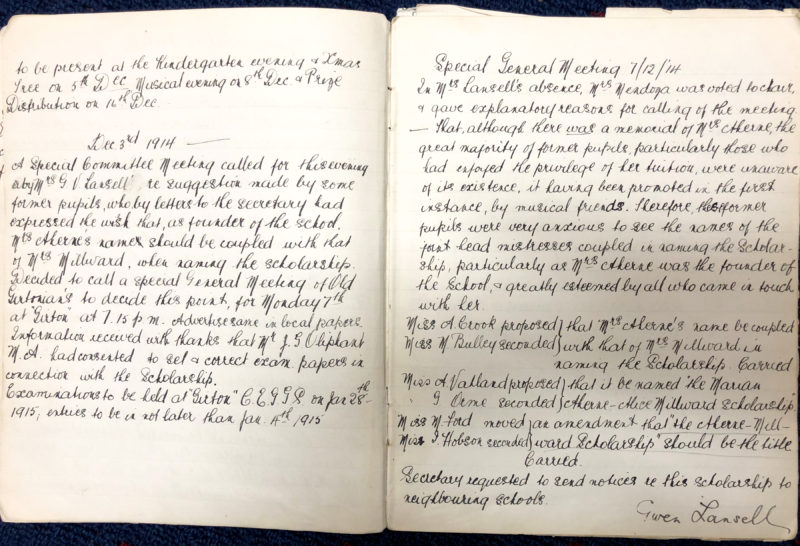