The following story was submitted by Old Girtonian, Maggie Wittchen, nee Margaret McCulloch, now living in Adelaide with fond and not so fond memories of the Girton Boarding House.

I started at Girton in 1957, grade 5, as a boarder. We lived in Elmore and my dad was the manager of the (then) Bank NSW (now Westpac) and my mum was a teacher at Rochester High School. Mum had been to Teachers College with Headmistress Miss d’Helin and my parents thought it an excellent idea that I should attend boarding school.

Well, it certainly was not for the faint hearted – the boarding conditions back then. Most of us slept in the dormitory which was like a big sleep out – lots of fresh air and extremely cold in the winter. We had 1 toilet only for 30+ girls and we shared this with anyone who was in the sick bay as well. The junior boarding area was occupied by girls from (as I recall) 10 to 15 years of age. There were 2 monitors who were expected to keep things orderly and the junior boarding mistress was one Robin Allison.

I was a wimpy kid, suffered terribly from homesickness and made my special mark by becoming hysterical when the first ‘exit’ weekend arrived and every boarder was collected by family, friends or relatives……except for me.  This dreadful display of despair set me up as a target for the bullies. One of the monitors (Janice) was particularly unpleasant towards me and there was absolutely no use complaining about it because the monitor would always be backed by the house mistress.

We ate downstairs in a huge dining room, but first we had to line up and proceed down the stairs in an orderly fashion to our allocated place at our allocated table – which was headed by a house mistress, with a prefect at the other end.  Grace was said before meals and after meals. We ate fairly quickly and one might be in a lot of trouble if one did not finish the food on one’s plate.  We had many ways of secreting unwanted, unappetising food, like liver (which most of us hated) whisking it away from the table by various cunning means.

After breakfast, bed making and cleaning our cubicles, 5th & 6th graders would take off down to the junior school, racing downhill between the peppercorn trees. Nancy Cure was our teacher for both years. I recall her being quite strict, but well-meaning. I was academically good, but with a dyslexia issue which prevented me from putting words onto paper nicely and correctly….although I had no trouble reading (and I loved to read). Well, Headmistress d’Helin got wind of this and directed that I should attend her office at the end of every school day to have my written work inspected.  What started off as a big mess slowly started to improve with her encouragement and my fear of letting her (my Mum’s friend) down. As an adult I came to respect what she did for me. I don’t believe folk talked about dyslexia back in the 50s. I continue to have very nice handwriting, although if I write (or type) too fast the letters rearrange themselves and the words don’t make sense.

My friends were Elizabeth “Frizzle” Parsons (also from Elmore) Jocelyn “Jolly” Armstrong and Patricia “Oopie” Creber (think they were both from Echuca). Oopie managed to distinguish herself by throwing up on stage when we were presenting a concert to the public. Poor Oopie. Oh, and Gail Fletcher from Lorne and Wendy “Frilly” Richards – the Bishop of Bendigo’s daughter. And a daygirl called Suzanne Judge.

During grade 5 I managed to get myself sent home with impetigo and flu. During grade 6 I jumped off my wardrobe onto the bed and dislocated my knee (I was showing off to Frilly Richards)….that got me sent home as well. During grade 6 I also managed to “establish” myself much better, I was very good at sport, my grades were good (once we sorted out the writing) and my new bestie was Janice the monitor!

Well, also in grade 6, I managed to disgrace myself on the way home from the Sunday School picnic. A group of us found ourselves in a train carriage without supervision and with, wait for it, boys. By the end of the ride we were all in love with Bobby Shepherd and Donny Redrop (both choir boys at our church). I kissed one of them on the cheek and had a puff of a cigarette. By the end of the ride we had also been reported.  The next day at Monday assembly we were all marched up on the stage and presented to the whole school. Each of us had to step forward and confess our sins. A kiss on the cheek and a puff of a ciggie, I was a fallen woman at the ripe old of 12. As punishment I was gated for the rest of the year and not allowed to see my parents. Headmistress d’Helin announced to the whole dining room that she was disappointed in me “in every single way”. Oh, the shame! 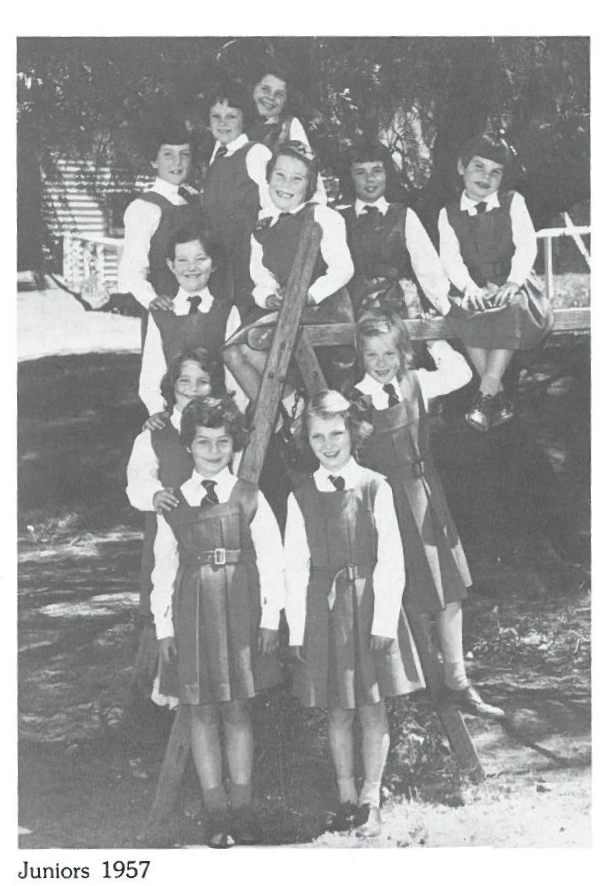 Although Maggie is not pictured here, the Class of 1957 was very much her era.