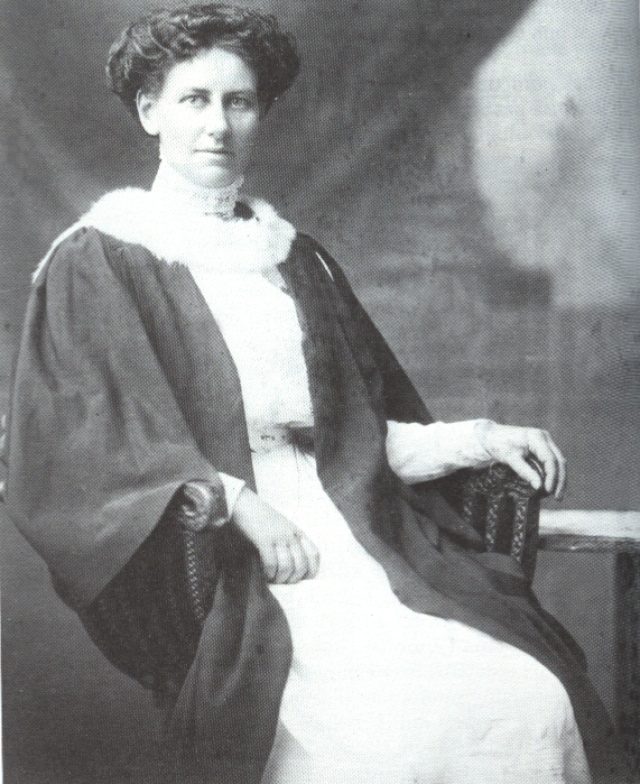 Miss Marguerite (sometimes spelt Merguirite and Margaret) Dumaresq was the granddaughter of Captain Edward Dumaresq, a Kew pioneer, who took up land there in 1851.  She was educated at the Genazzano Convent and was its first pupil to graduate in arts at the Melbourne University.  She went overseas for further experience and returned to Melbourne after the War.  With considerable teaching experience behind her, she established St Andrew’s school in Mont Victor Road, but sold this to the Reverend Lawton in the 1920s.  She also had an infant school in Normanby Road which was later taken over by Ruyton Girls’ School.  She was headmistress of Girton from 1922 to 1931.  Through hard work and dedication she re-established the school and restored the fine reputation which Girton formerly had.

The Girton girls called Miss Dumaresq, “Fanny”.  The Old Girtonians say that she had a very strong personality.  They were somewhat overawed by her and in a way frightened of her, yet at the same time they knew that she was a good headmistress.  One said that she “was a very clever person.  Being well educated and having travelled widely, she was a great talker and could tell parents interesting stories of many places.” Another said “She was a bit of a martinet.  She knew her subject, was a splendid mathematician, but could not impart her knowledge easily.  She was impatient with those who could not keep up with her.”  At the same time there is no doubt that her vigorous leadership restored Girton’s position as a good school.

Miss Dumaresq immediately set about improving the standards and tone of the school.  She made several necessary staff appointments.  She then urged the Council to speed up the proposed extensions to Girton House.  These included classrooms, a dining room and sleeping cubicles for seventeen girls.

The extensions also included a small science room, with gas and water laid on.  Miss Dumaresq spoke of her delight in having this facility which “will furnish us with the means of carrying out experimental work.”  The room was indeed small.  It was still in use when Miss d’Helin came to the school in 1952.  Being a trained science teacher she was horrified when she saw it.  It was so small, had no heating, and was totally inadequate for teaching science.  The room became a storage room by the 1980’s.

In August 1922 Mrs Frew offered Girton the first option on the Horwood’s property including Lots 1-4 in Vine Street, but excluding the Foundry.  She pointed out that if Girton acquired this property the school would have the whole frontage to MacKenzie Street from Don to Vine Streets extending towards High Street.  The Council accepted Mrs Frews offer and agreed to purchase the property in due course.  In the meantime they paid a deposit of £50.  In 1930 Mrs Frew presented Girton with the deeds, thus making over Horwood’s as a gift for only £50.  Once again Girton was deeply indebted to the generosity of Mrs Frew.

Near the end of 1922 Inspector Akeroyd reported that the school had made a marked improvement during the year and that there was now no need for the Government to take it over as had been suggested the previous year.  This was a tribute to the energy and resolve of Miss Dumaresq and her staff.

In her report at the end of the year Miss Dumaresq said that although they could not point to large increased numbers, “still it is with feelings of thankfulness and satisfaction that we review the work of the year.”

Miss Dumaresq continued “I should like once more to appeal to parents for close cooperation with the staff, by means of more frequent visits to the school in term time, and by helpful suggestions made directly to me.  Many people seem to think that all school authorities are supremely satisfied with their own methods and ideas, and resent any comment on these.  In reality, the reverse is the case.  Any proposals made in the spirit of friendly criticism will be warmly received, and if possible, acted upon.”

This year 1924 was one of marked progress, “perhaps the most successful ever held by Girton”.  These sentiments were expressed by the Bendigo Church News.  The enrolments for the year were 89, seven more than the previous year, with an increase in the number of boarders.  Successes had been obtained in the University examinations the previous year.

“The Principal is enthusiastic in all departments of school management, and not the least of these is the thoroughness and care bestowed upon the economic and domestic arrangements, which goes far to ensure the present satisfactory working.

Because of an unfortunate misunderstanding with the Council, Miss Dumaresq resigned from Girton in November 1924.  The deep concern of Council members was reflected in the letter which they sent to her.  They state “The Council was very sorry to receive your resignation, the more so as it appears from your letter that you resigned under the miss apprehension that you no longer possessed the confidence of the Council… we are very loathe that anyone should resign because of a  misapprehension and we wish to assure you that we have not lost our confidence… Consequently we shall be pleased if you will reconsider your decision, and let us have a reply at your earliest convenience.”  Miss Dumaresq accepted the explanation and withdrew her resignation.  Girton greatly benefitted from the following seven years’ of selfless service which she gave.

In July 1925, the Girton Council purchased the Kingdon’s property including an allotment on High Street for £2,300.  N.W. Kingdon had purchased Lots 14 and 15 in Myrtle Street from the Bendigo Amalgamated Goldfields Ltd in 1923.  This company had taken over the Burrowes mine.  The actual transfer of title to Girton took place on 25 January 1926.  Girton’s overall property was now increased substantially.  The additional land enabled development in future years, although by 1984 the total area is far too small for the greatly expanded school.  Kingdon’s house became Frew Hall in 1930.

In her annual report Miss Dumaresq stated that the year had been, in spite of many problems and difficulties, a successful one on the whole.

Miss Dumaresq concluded her report by making an appeal for greater support for the school “With regard to our future, this is the only Church Grammar School in this diocese and we need the support and interest not only of the City of Bendigo, but the whole northern district.  How can either advance far without adequate educational facilities?  The large city schools are becoming too large, for the greatest efficiency; the country ones are struggling against odds for lack of support.  Give us the pupils and we will show that Bendigo can take its right place in the educational world as well as in other departments of public service.  There is an urgent need, too, for a public school for boys in Bendigo.”

A Girton prospectus for 1926 or 1927 has some interesting sidelights on the school at that time.  The school hours were from 9am-12.45pm and 2pm-3.30pm and children were not to be in the school grounds more than fifteen minutes before the school opened.  The aim of the school was to provide “a liberal education for girls, including religious instruction, with the object of securing the fullest development of each individual for service to her country and her church, and to fit her for life.”

At the end of 1926, Miss Dumaresq stated “Interest in sport has been greatly stimulated and sustained by the introduction of physical culture and games as part of the school programme.  The work has been capably carried out by a trained expert, Miss M Munro.

In 1928 the school uniforms were changed from navy blue to fawn. From 1914 the school colours had been navy blue and gold.  The Beehive in Bendigo provided specially woven material in a mixture of colours for the uniforms.  The material was quite expensive because of the small quantity required.

Miss Dumaresq was on leave in England from May to December 1928, and Miss Edith Mason, an Old Girtonian was acting headmistress during her absence.  Miss Mason carried out her additional responsibilities very well, one report stating that the “management is entirely satisfactory and Miss Mason is to be complimented o the excellence of her work.”

Miss Dumaresq resumed her duties as headmistress of Girton at the beginning of 1929 after her overseas trip the previous year.

The first volume of the The Girtonian appeared in December 1929. Girton continued to publish this informative magazine annually until 1974.

The year 1931 was Miss Dumaresq’s last year as headmistress of Girton.  Australia was now entering the worst economic depression in its history, lasting until 1935.  Almost one-third of the work-force was unemployed while wage-earners had their incomes reduced by ten percent.  World trends were largely responsible for the trouble, Australia being particularly vulnerable because of her dependence on exports of her primary produce.  The Depression meant that a number parents no longer were able to send their girls to Girton.

The two girl-editors of The Girtonian spoke of the departure of Miss Dumaresq in affectionate terms, “This year we will be very sorry to say goodbye to our Headmistress, Miss Dumaresq.  During her ten years here the school prospered greatly.  The number of pupils increased wonderfully since she has held the reins of management in her hands.  Of course, this year, owing to the financial depression, the number has decreased.  Our new Headmistress will be Miss King, who was formerly a mistress at Girton when Miss Pratt was Headmistress.  We wish to take the opportunity of wishing Miss Dumaresq every success in her future activities, and also to thank her for the interest she has taken in all our doings.”

In the Inspector of Schools from the Education Department annual report, he states that instruction was given at the school from sub primary, through the primary, and on to the immediate and leaving certificate standard.  “Good teaching was given in the various branches of mathematics, geography and botany I the secondary section of the school.  A good system of individual records of progress had been inaugurated.  The organization was comprehensively worked out.  The tone, manners and deportment of the girls were excellent, a fine character training being imparted.”

The Girton Council also expressed its deep gratitude to Miss Dumaresq for her work, stating that “realising that to Miss Dumaresq’s many talents, uniting efforts and high educational attainments, the school owes more than can be easily expressed, places on record its warm and cordial appreciation of her work during the past ten years.  The Council further expresses its warm gratitude to her and trusts that much happiness and usefulness await her in the future.”

Miss Dumaresq left Girton at the end of 1931 to become Headmistress of St Andrew’s School, Kew.  She later retired to the property she had inherited from her father in Alfred Street, Kew, now the St George’s Hospital Nurses’ Home.  She continued her many cultural interests, being a foundation member of the Kew Historical Society and a vice-president for a number of years.  She died at Kew on 10 July 1975 at the age of 91 years.

Miss Dumaresq had done much for Girton during her ten years’ service there.  She had taken over the school when it was at a very low ebb and had restored its educational creditability and its reputation as a leading girls’ school in Bendigo.  She was headmistress for a decade giving the school a sense of stability.  During her time the School acquired two additional properties which ensured its expansion in the years that lay ahead.  She gave the girls a sound education and preparation for life in a nation which was experiencing the trauma of depression and decline.  She had been one of Girton’s great headmistresses.