According to the Association of Financial Advisers, of all financial planners in Australia, only 20 per cent are women. Given female graduates are outnumbering men in many fields and a number of other factors are contributing to money coming into female hands, it makes sense that Financial Planning is a growing female profession.

Perhaps these realisations had some influence over Laura Sheather (Aherne 2012) who is majoring in Finance and Financial Planning as part of her Bachelor of Commerce degree at Deakin University in Burwood.

Laura’s Science teachers at Girton may be disappointed to hear that Laura decided not to pursue the Bachelor of Science that she commenced at Deakin, however, the influence of Laura’s teachers was broader than the subjects that they taught.

Laura also said that Mrs Brewin was one of her most influential teachers.

“Mrs Brewin was always encouraging us, whether it be in the class room or on the volleyball court, she always saw the best in you and helped you to see it as well,” Laura said.

Having done many things along the way including winning a Women in Financial Planning Excellence Award from the Deakin Business School, Laura is now in her final Semester of her Commerce degree, whilst working part time for Kofkin Bond & Co, a financial services company. 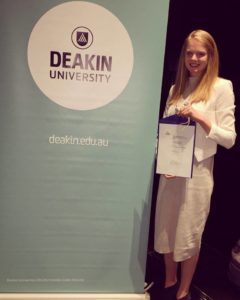 Laura at the Women in Financial Planning Excellence Awards

“For the past 18 months I have been an Associate, assisting the advisers in preparing advice documents and carrying out client services tasks.

“After finishing Year 12, I did not have much of an idea about what career path I wanted to take. All I was concerned with was getting in and finishing my degree as quickly as possible.

“However after the first year, I landed a great job with ANZ, which was 4 days a week so I scaled back the number of University course units I undertook each semester which has allowed me to work in different jobs, participate in numerous volunteer roles and still enjoy catching up with friends.

“I also think this has helped to confirm my career path as I have been able to try different jobs and opportunities,” Laura said.

Before commencing tertiary study, Laura took a gap year and worked various jobs waitressing, at cafes and babysitting. During her second year of university, she worked with ANZ Bank in their settlements department, which involved liaising with brokers and solicitors to book in property settlements and organising customer refinances.

Since finishing at Girton, Laura has travelled to Europe, Cambodia, New Zealand, and recently returned from an Internship in Tokyo as part of a federal Government scholarship program for study called “The New Colombo Plan”.

“The Scholarship internship was with Mitsui & Co in Tokyo. The program is designed to lift knowledge of the Indo Pacific in Australia by supporting Australian undergraduates in studying and undertaking internships in the region.

“We visited Toyota and the production line of Toyota Vehicles which was fascinating,” Laura said. (See photo).

Laura’s hobbies involve volunteering for Ronald McDonald House and for Goalball Australia (a Paralympic sport – she is a recent past Treasurer). She also enjoys running and is currently training for a half marathon, with past Girtonian Georgie Jenkins. 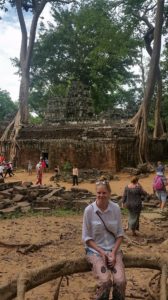 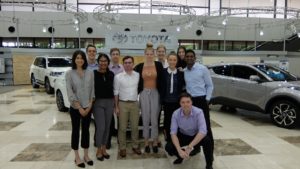 Visiting the Toyota factory in Japan