Sam Winzar (2006) may have bitten off more than he could chew when he purchased a house in Bendigo and promptly took off to London where he paid exorbitant rent whilst managing a mortgage. But it was nothing that a few months of living off his wits and Two Minute Noodles could not fix.

Sam has now been in London for two years and has more than found his feet. For someone who did not know what they wanted to do when they finished Year 12, it seems a path has now been clearly forged.

Sam completed a Bachelor of Occupational Therapy at La Trobe University, Bundoora, then returned to Bendigo to get some work experience that might give him a good foundation for taking his profession overseas.

His first job was at Vision Australia in McIvor Road with blind and vision impaired people.

“It was a great first job and the experience gained from it was invaluable.

“I then worked at Bendigo Health in the hospital and the Anne Caudle Centre.

“This experience was really what motivated me and allowed me to come to the UK as I was able to gain experience in a number of areas of occupational therapy,” Sam said.

Sam has had a number of jobs at hospitals in London and Scotland, ranging from small local hospitals to major trauma hospitals in central London. He has managed to swing some travel around Europe during the summer periods.

“I did not think I would be able to travel the world so soon using my degree and with limited work skills but it’s been the experience of a lifetime living over here.

“Working as a locum has allowed me plenty of time to get to see a lot of Europe which has been an irreplaceable experience.

“It’s amazing the ways that the old Girton days can creep up on you. I didn’t fully appreciate it at the time, but Mrs Halleday’s immersion French class in year 7 and 8 has proved handy in the past couple of years!” he said.

Sam credits Rick McWaters and Cate Brewin for the huge role they played in encouraging and mentoring him in volleyball during his school years. He says that playing volleyball gave him great opportunities over the years at Girton.

“Volleyball was a huge part of my life at school. From Schools Cup Competitions to different tournaments around Australia, the sport taught me so many things.

“After school I went on to become assistant coach to Todd Braodbent, another Old Girtonian, at the Bendigo Bank Academy of Sport Volleyball Program.

“It was great experience to be part of something that I was involved with all through secondary school,” he said.

Sam plans to head back to Australia in 2015 and is most likely to peruse private work as an Occupational Therapist in Melbourne. We wish him the best of luck in the next chapter of his work and private life.

Pictured: Sam (right) with a friend in Wales 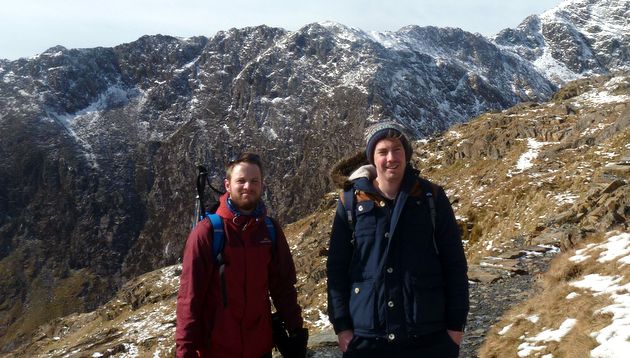