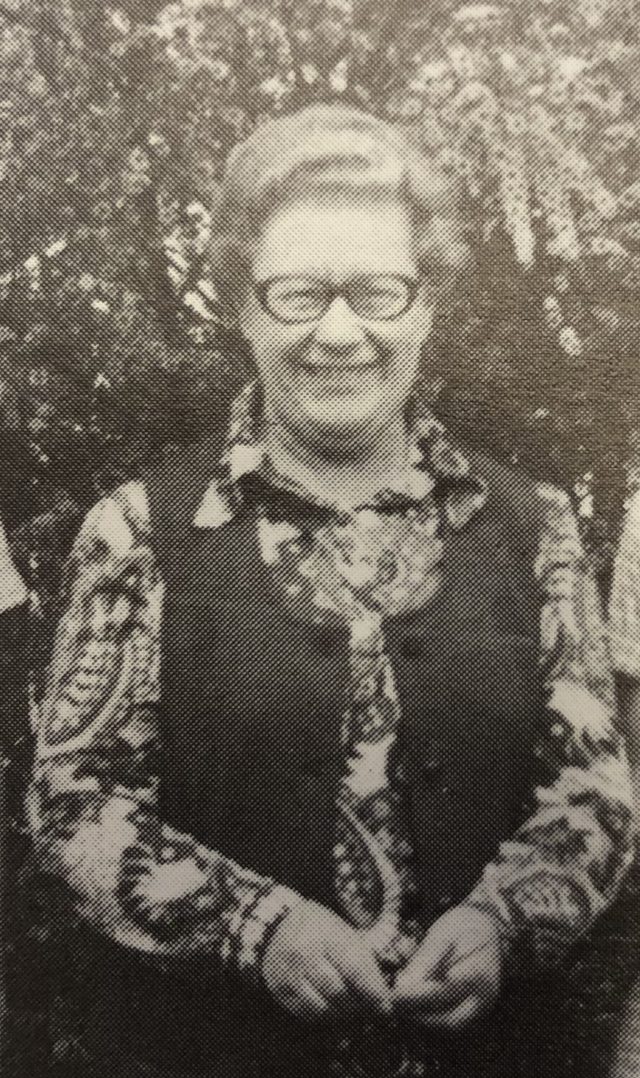 “Watty”, as she was affectionately called joined the Girton staff as a House Mistress in February 1949.  She became Bursar in 1953 and for the next twenty-three years combined her duties with those of headmistress’s secretary, book-keeper, staff typist and general factotum.  Miss Watson resigned at the end of 1975.  The Girtonian of 1976 spoke of her loyalty to the School. “This loyalty and concern for Girton is what we’ll remember.  The staff appreciated Watty’s friendship, honesty in relationships – you always knew whether you’d done the right thing in Watty’s opinion – her efficiency in a complex job, her sense of humour and her habit of lightening the day by repeating a joke she’d heard.  We wish her a long and happy retirement.”

Mr Bickerdike also paid tribute to Miss Watson for her twenty-six years’ magnificent service to the School.  He said, “She, in her unflappable manner has kept the engines running.  I am sure that she must have winced at times, although I was never aware of it, at the unorthodox way that I went about things.  She has proved an invaluable source of all the incredible detail which comprises the day to day administration of the School.  I am going to miss her remarkable memory and the little anecdotes of Girton with which she would punctuate our conversation every day.  Thank you, Watty, for piloting my maiden voyage so well.”

When Miss Watson (Wattie) spoke at the Ninetieth Anniversay celebrations in 1974, she reflected on what Girton was like twenty-five years previously.  She said, “I joined the staff at Girton as a resident member just 25 years ago, not very long after the end of the World War II.  The School looked rather shabby, as materials and goods (and staff, both teaching and domestic) were still in short supply.  the Principal, Miss S Warren, lived in Girton House her study where Miss Hardy’s is now, her bedroom the room next to my office, and her bathroom, the present tuckshop.  She was a small woman, about 5’2”, with a lovely sense of humour, known to all as ‘Bun’.

“Also in Girton House, besides 17 boarders we had three other resident staff, who lived upstairs, and me, sleeping downstairs.  We were all fairly young (one was Sue Kerr’s mother) and we managed to have a lot of fun together.  There was a famous ‘fish’ episode, and the rat plague, never-to-be-forgotten highlights.

“Frew House had three resident staff and 26 boarders.  We also had a dear old lady who came in each afternoon at 4.00pm to ‘look after the boarders’.  In appearance Frew House has changed a lot as it had a wide verandah along the front and one side, with some lovely iron lace.  It also had the Frew ‘ghost’ which used to walk just before Easter.

“The only classrooms in the Senior School which remain are the Art Room and Room 6.  The brick wall along MacKenzie street continued along the street to the end of the present classrooms, then came up through the grounds between Frew and Girton.  There were most impressive double gates opening on to Don Street, and the classrooms were all in the Art Room/Craft Room area with a detached room, which had been an old chapel, there was a fair amount of space at the front of the School.

“The Assembly Hall and the classrooms in that area have not changed, but the Oval was just so much waste ground which grew some magnificent weeds.  We had most enjoyable bonfires there on Guy Fawkes night, with crackers and all.

“Twenty-five years ago students wore a brown tunic and blazer, as the Girton tweed had been unobtainable during the War, with brown, wide-brimmed felt hats which shrank when wet, so that they looked at times like a pill on a pumpkin.

“For summer they had a fawn Lystav frock with brown buttons.  On Speech Night and special occassions they all wore white frocks.  Fur Church during the Summer boarders wore a blue frock, plainly made with a white collar.

“I am sure you will realise from these notes that there have been many changes since I first joined the Staff, some good, some which have not stood the test, but I have enjoyed these 25 years, particularly the girls I have met, for the girls make the School, and the friends I have made.”