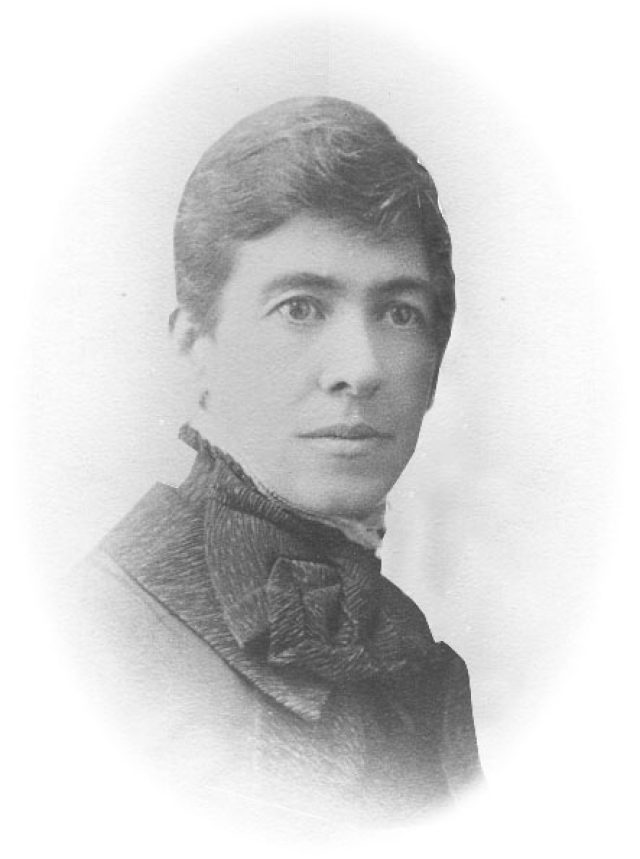 Miss Marian Parker (later Mrs Aherne) was born in Cork, Ireland in 1848 into a staunch Catholic family.  In her childhood, she witnessed the Irish potato famine and the sufferings of the peasants around her ancestral home.  Her family was very religious.  Her brother joined the Jesuits and she was sent to an exclusive French convent.  Here she became proficient in those subjects designed to prepare ladies for gracious living, including music and needlework.  Her French became as fluent as her English, which as one of her pupils later said, “she spoke with a pure and musical accent”.  Writing about her after her death, the Bendigo Advertiser stated: “Mrs Aherne was a splendid linguist, speaking French particularly with great fluency.  She was also a first-class teacher of music, and the success of Girton college pupils for some years past has been most remarkable, and gained for the College a high name throughout the Colony”.

Marian’s father, John Parker, was a Lieutenant with the Royal Engineers, who had been posted to the convict settlement of Port Arthur in Tasmania.  Marian joined her father there when she was about eighteen years of age.  The sight of the chained gangs of convicts and the misery of their lives so distressed her, that her father sent her back to the Convent until he returned to England.

While in England Marian became engaged to David Francis Aherne.  She came to Australia in 1870, where they were married.  They settled at Stawell, a country town in the Wimmera region of Victoria.

One of her pupils described her as “slight and upright, with a beautiful figure.  Her face, though intellectual, was plain but full of character.  A large and generous mouth contradicted with grey eyes flecked with black, yes which struck terror into many a young offender.  A complex character with conflicting traits – a woman one could never forget – a woman who in a higher stratum of life and in earlier times might have influenced dynasties… She had religion deeply rooted in her character, but she never used her great personal magnetism to influence others.”

David Aherne had previously arrived at Stawell in 1866 where he practised as a barrister.  He was very popular and described as a thorough gentleman, genial and kindly”.  He died suddenly on 11 June 1882 aged 38 years, and was buried in the Stawell Cemetery the following day.  He and his wife had no family.  Following the death of her husband, Mrs Aherne took over the small Ellerslie Ladies’ School at Stawell.

Mrs Aherne was a vivacious and far-seeing co-Principal of Girton Bendigo, who had been inspired to further women’s higher education by the establishment of Girton Cambridge.  She saw in Bendigo the potential for a select school which would take girls through to matriculation and to the University.

Upon her passing in 1897, the Bendigo Advertiser paid tribute to her in a lengthy obituary which read: “The news of the death of Mrs Aherne, the senior principal of Girton College, will be received with sincere regret by her numerous friends in the city and other parts of the colony, where she was well known and held in esteem.  The deceased lady, who was 49 years of age, was a native of Ireland, where her father held a position in the military service.  She was educated at a convent in France, and when young went to Tasmania with her father, who has now retired from the service and is residing in England on his pension.

“The deceased was married to the late Mr Aherne, a barrister, who practised for some years in stawell.  On the decease of that gentleman, Mrs Aherne and Mrs Millward came to Bendigo and opened a young ladies’ scholastic establishment in Hustler’s Terrace.  The school quickly grew in popular favour, and in order to accommodate the increasing number of pupils larger premises had to be secured, and Girton College, Rowan Street, was opened.

“Mrs Aherne was a splendid linguist, speaking French in particular with great fluency.  She was also a first-class teacher of music, and the success of the Girotn pupils for some years past has been most remarkable, and gained for the college a high name throughout the colony.  The deceased lady was a very charitable nature, and many who were the recipients of her unassuming generosity will sadly miss her.  Two or three weeks ago she was seized with an attack of influenza for which she was treated by her medical adviser, Dr Hinchcliff, who was also a very intimate friend.  She was approaching convalescence, but her temperament would not allow her to wait for complete recovery before resuming her duties in the college.  The result was that she caught a fresh cold, and again had to take to her bed.  Dr Long, along with friend, was called in with Dr Hichcliff to attend her, and it was found that she was suffering from a sever attack of pneumonia.  Although all that medical skill could suggest was done for the patient, she gradually got worse and expired shortly after nine o’clock yesterday morning.”

On the evening of 22nd June, 1897, when Marian died of pneumonia at the age of 49, her remains were taken by Mr Millward and Dr Long by train to Melbourne and the following day to Stawell, where she was buried alongside her husband in the cemetery there.