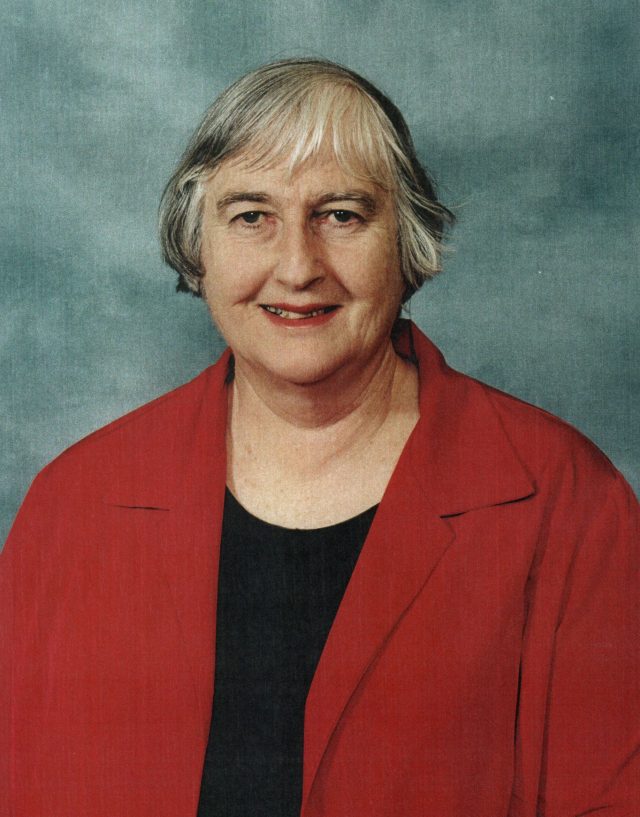 Below is a copy of the citation that was written by Mr Clayton W Jones after the news of Mrs Betty Jenkin’s passing in 2005.

The School was greatly saddened by the news that our stalwart Mrs Jenkin had died in the course of medical treatment on Monday 10th October 2005. Betty had stood down from her varied duties at the School a few months after being diagnosed with cancer. In the course of an aspect of chemotherapy treatment, we understand she died of a heart attack.

Mrs Jenkin joined Girton in the mid-seventies. Over the intervening years, she was, and remains, hugely influential in her leadership of, and inspiration to, students and staff. Betty taught French, English and English Literature. She had a towering intellect and a deep love of learning and teaching. Consummately professional, her measured wisdom influenced many aspects of the way in which Girton was run. She was at the heart, soul and spirit of the School. Staff, students and this Headmaster sought her advice and valued highly her opinions on a wide range of things.

To list all her achievements would be very difficult and probably worthy of a large book. She was a former Head of Languages at Girton College, a highly influential Head of Aherne House from 1994 to 2002, Head of English, and Foundation President of the Girton Grammar Common Room (Staff Association) in 1993. She edited The Girtonian from 1988 until she had to stand down earlier in 2005 owing to her diagnosis of cancer. Her leadership of public speaking and Girton’s Lions’ Youth of the Year co-curricular activities has had a huge effect on the culture of the School. Betty influenced many speeches of Captains, Prefects, students and staff on Girton’s major occasions adding the polish, wit and style for which the School’s speakers are known. Girton’s students have dominated the local Lions’ competitions because of Betty’s leadership, with Louise McCarthy’s (12 Frew) win of the Victorian Lions’ Youth of the Year and Victorian Plain English Speaking titles in 2005 being worthy testament to Louise’s and Mrs Jenkin’s abilities.

In 1995, Mrs Jenkin was awarded the Board’s prize for General Excellence, and her name is proudly placed on the Staff Prizes Honour Board in the John E. Higgs Hall. In 2001, she was the regional winner and national finalist in the Australian Teachers’ Awards for Excellence in recognition of her achievements. The Old Girtonians bestowed an Honorary Life Membership on her, and she managed the OGA office for the past few years.

None of this tells of the spirit of Betty Jenkin. For me, she was the School’s history in action. She was a natural successor to such Girton luminaries as Mrs Jean d’Helin, Girton’s inspiration from the ‘50s to the ‘70s. Betty not only knew the facts but had the understanding and context. Betty knew the people of Girton, their strengths and flaws; she revelled in the former and forgave the latter. Betty knew English – grammatically, syntactically and with style. She spoke and wrote elegantly, and shared a revulsion for ‘weasel words’, spin, ‘edu-speak’ and management-speak. Betty proof-read School reports and documents for us. Betty knew Literature. One of my major achievements was to quote a couplet from Wordsworth which she didn’t recognise; she subsequently sent a note acknowledging this in the adapted verse of WS Gilbert. I treasure that note! Nothing else in thirteen years escaped her, especially if she believed I had chosen a questionable context.

She was immensely proud of her family; her father had been a Principal in State Schools in rural Victoria. She loved and married Andrew, a teacher of mathematics, and reared four children including Deryck, also a teacher, including at Girton, Catherine, Ralph and Marian (Aherne 1997 and highest ENTER at Girton that year).

That the Board chose to name the fifth House of the School, Jenkin House, after Betty, while she still had a strong and active connection with the School, is testament to how Girton views her.

Betty was a great friend and confidante to many colleagues and students. No greater teacher or colleague has graced this School. I feel deeply privileged to have worked with Mrs Elizabeth Jenkin and to have had her tremendous support, spirit and collegiality. Bendigo and Girton are much the poorer for her absence. Ave atque Vale.