Meg McKinlay is exactly how you imagine, and in your mind, romanticise, an accomplished author of novels to be. One of those people who carries a little black book everywhere they go and who scribbles things down as they see them or even better, at surprisingly random moments when they think of them. As Meg says, she is an observer of people and a collector of fragments.

Like all the best artists, including writers, Meg harbours a delicious insecurity so disproportionate to her capability, and yet so genuine, you know she would be fun to tease. She says things like, “….any moment in which I manage to get the right words in the right order feels like a victory,” and “I’m good with ideas and images but terrible with plot and structure.”

This, from the winner of a Prime Minister’s Literary Award and the author of 13 published books.

It all began when one of her scribbled fragments turned into something that looked like a poem, which ended up being published by a literary magazine.

Meg makes it sound like a happy co-incidence that she has ended up a National award-winning novelist, most recently receiving a Prime Minister’s Literary Award for her novel titled, “A Single Stone”. However, behind the outrageously humble exterior lies a hard-working and extremely talented Language and Literary expert with a PhD in Japanese Literature.

Her daughter is at University studying Astrophysics and her husband is a Clinical Psychologist, so there is no lack of stimulating dinner table conversation, which no doubt fuels Meg’s intellect or at the very least, imagination.

Meg (who was referred to at school as Megan) was at Girton from 1981 until 1987, having spent 1986 in Japan on a Rotary Exchange Scholarship.

She has many fond memories of school, including school camp.

“The inspiration for one of my books – Surface Tension – came from a Girton school camp to Tallangatta.

“I can’t remember whether it was Year 7 or 8 but we stood on the edge of the lake where the old town lay deep underwater – having been flooded as part of the Lake Hume expansion – and years later my memory of that kick-started a story that turned into a novel,” she said.

Meg’s most influential teacher was Mrs Betty Jenkin who Meg had over the course of a number of years for French, English and Literature.

“Mrs J was incredibly influential for me. We bonded over a shared love of literature and language and I honestly thought of her as more of a friend than a teacher, particularly in Years 11 and 12.

“I even stayed at her house for a couple of nights so I could attend musical rehearsals, which would have been impossible for me otherwise. I’m not sure the school knew about this and it’s certainly not the kind of thing that would be allowed today.

“Mrs J somehow always seemed to know where I was at, and what I needed next.

“She would slip me the right book at the right time; on more than one occasion, I found a book she’d left for me in a strategic position, with a note saying, “It’s time for you to read Zola!” or “I think a little Kafka is in order.”

“Mrs J made me feel heard, understood, and intrinsically valued. Even as an adult, I used to visit her when I went ‘home’ to Bendigo.

“Even though we hadn’t spoken for a year or so, when I heard of her death, I felt an incredible sense of loss,” she said.

After graduating, Meg took a gap year to accumulate some savings and during that time decided she would not do the Arts/Law course at Melbourne University in which she was enrolled.

“I decided it was time for a change, to go somewhere no one knew me, with no expectations, and see who I turned out to be.

“So I hopped on a bus and moved to Western Australia, where I did a BA(Hons) at the University of WA with a double major in Literature and Japanese Studies.

“After a couple of years away from study, I returned and did a PhD in Japanese Literature,” Meg said.

Meg maintains that she had no idea she would become an author and next year, will make the leap into writing as a full time career, not supplemented as it has been, with academia doing sessional academic work, as well as freelance copy-editing, and part-time work for an arts organisation in Perth. 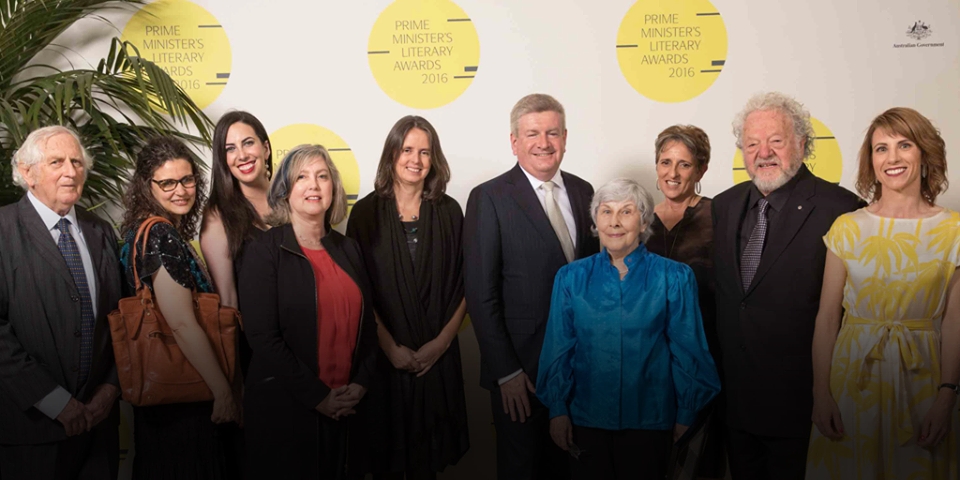 Meg, fifth from left at the Prime Minister’s Prize for Literature

“I had no sense at all of the path I would take, or whether I wanted a path at all.

“I did my PhD because I love the study of literature, wanted the challenge of an original research project, and had no idea what might come next.

“I was fortunate to be awarded an APA which funded my studies, and then started picking up tutoring and lecturing work along the way.

“I slipped quite happily into academia and imagined I’d probably settle there in some form,” she said.

Since leaving Girton Meg has been a swimming instructor, a Japanese-speaking tour guide, a translator, a manager of an office of a Japanese inbound tour operator and a tertiary lecturer.

Meg now lives just outside Fremantle and loves her home near the ocean.

“Reading is always at the heart of things for me, and I’ve surprised myself by taking up gardening in recent years – vegetables rather than flowers, though.

“I find few things more satisfying than wandering out the back to pick things fresh for dinner,” she said.

For more information about Meg and her books, go to: https://megmckinlay.com/